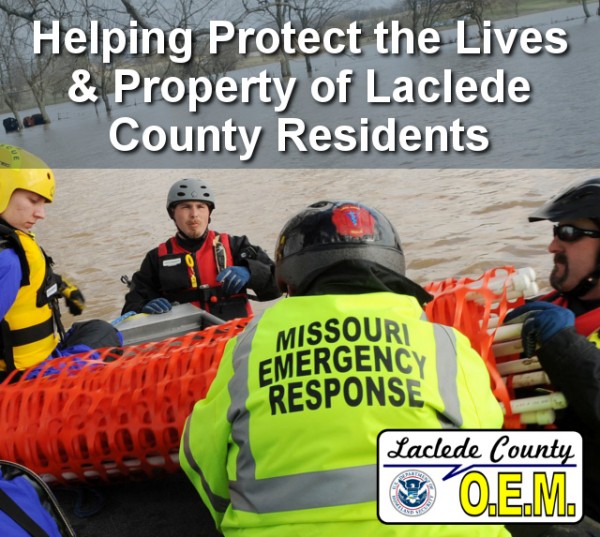 Click the button below to see the rest of the staff.

To protect the lives and property of all residents when major disasters threaten public safety in any part of Laclede County. The Laclede County Office Of Emergency Management responds to two types of disasters – natural and man-made. Natural disasters are major snow and/or ice storms, floods, tornadoes and/or severe weather, as well as the threat of a serious earthquake along Missouri’s New Madrid Fault. Man-made disasters may include hazardous material incidents, nuclear power plant accidents and other radiological hazards. The Laclede County Office Of Emergency Management is also responsible for developing a County Emergency Operations Plan which coordinates the actions of Laclede County government departments and agencies in the event of any emergency requiring use of resources and personnel

Weather.gov > Springfield, MO > Summary of Severe Weather on May 4th, 2020

A frontal system over the region resulted in the development of numerous severe thunderstorms that caused extensive hail and wind damage over portions of the area. Storms moved into southeast Kansas and far southwest Missouri Monday morning, with the first storm report coming in at 9:10am CDT. This initial round of storms moved west to east across the area, changing from primarily hail producers to wind producers generally after they passed the Highway 65 corridor.

Quickly following the first round of storms was a line of storms that started near Topeka, KS and roared into east-central Missouri in the early afternoon. These storms then impacted the eastern Ozarks during the later afternoon hours. This line produced substantial straight-line wind damage along portions of it’s track, with maximum winds of 80-90 mph (possibly higher) in portions of the Ozarks. The Lebanon Airport anemometer recorded a wind speed of 89 mph before going offline.

A third round of severe storms then developed in the late afternoon and evening along a warm front over southeast Kansas and far southwest Missouri, producing primarily large hail. This third round of storms would have threatened a greater portion of the forecast area, but cold air spreading from earlier thunderstorms kept much of the area too cool to support additional severe storm development.

Severe thunderstorms were ongoing almost the entire day across the National Weather Service Springfield’s coverage area, with the final storm report coming in at 9:12pm CDT.

There has been some speculation that some of the wind damage from Monday was caused by tornadoes, but all the evidence at this time suggests it was caused by straight-line winds. This preliminary determination has been made through the use of radar data, pictures, and through the support of Emergency Management, Fire, and Law Enforcement professionals in the impacted areas. The National Weather Service will continue to gather information and evaluate the situation.

Two severe thunderstorms caused wind damage to the Lebanon area on Monday. The first storm moved through early in the afternoon and caused some scattered wind damage. Following the first storm by just over an hour, the second storm produced widespread significant damage, with the Lebanon Airport wind observation hitting 89 mph before the system went offline.